You can join the meeting at any time between 4 and 6 PM. Free admission

[1]
Meeting with Marcin Dudek during the assembly of the work Tunnel Recording
9.5 (Wednesday), 4–6 PM, level 3

[2]
Meeting with Mariusz Tarkawian during the creation of the work Progressism
10.5 (Thursday), 4–6 PM, level 4


Have you ever had a chance to talk with an artist in a less formal situation? Do you know what it feels like to co-create a piece that will be exhibited? Have you ever seen the assembly of an exhibition from the inside?

In the week preceding the opening of the new exhibition we would like to invite you to visit MWW and take the opportunity to observe the work of artists – Marcin Dudek and Mariusz Tarkawian. Two days, two hours, and two artists open to cooperation, interaction, discussion about their work and answering any questions you may have.

You can join the meeting at any time between 4 and 6 PM.


[1] Meeting with Marcin Dudek
9.5 (Wednesday), 4–6 PM, level 3
During the meeting you will have an opportunity to watch the assembly of the work Tunnel Recording, 2006/2018, installation (foil, tape, stretch, furniture), ca. 400 x 420 x 250 cm, video documentation, 10’44’’ (Collection of Wrocław Contemporary Museum, co-financed by the Ministry of Culture and National Heritage)

The installation entitled Tunnel Recording is a recreation of the original version of the work, which was made by Marcin Dudek in London in 2006. The artist used tape and self-adhesive film to make a kind of tunnel in his room. The peculiar sculpture gradually expanded, first resembling a cobweb, and later, as the skeleton became filled in – a cocoon devouring all the furniture. While working on the installation, Dudek kept living in the room, which was increasingly claustrophobic day by day. Just like the nervous system, the installation responded to the artist’s movement during sleep or when working on the computer. The main point of reference for the action was Merzbau, a construction by German Dadaist Kurt Schwitters. Built in Hanover since 1923, it was a spatial installation made from various materials available to the artist. Its appearance resembled a cavern filled up with random objects and waste. As time went by, the construction began to encompass the entire flat. The process was stopped when Schwitters fled Germany from the Nazis in 1937.

Marcin Dudek (b. 1979) lives and works in Brussels and Cracow. After leaving Poland at the age of 21 he studied at the University of Art Mozarteum in Salzburg and Central Saint Martins in London, which he finished in 2005 and 2007, respectively. He uses performance and makes installations, objects and collages; in his practice he usually arranges situations based on confronting the world of violence with the world of art. To this aim he frequently refers to events taking place at stadiums, or draws on his experience from the time when he was an ardent football fan; he subjects his memories to deconstruction in the gallery space. In this case, a space which is used to exhibit artworks or initiate artistic events becomes a venue for clashing the artist’s personal experience with universal notions concerning the psychology of the crowd as well as subjects connected with architecture and the society of the spectacle.
description after: Przemysław Strożek http://culture.pl/pl/tworca/marcin-dudek

[2] Meeting with Mariusz Tarkawian
10.5 (Thursday), 4–6 PM, level 4
During the meeting you will have an opportunity to watch the assembly of the work Progressism, 2018, drawing on the wall, black oil-based marker
Courtesy of the artist

Mariusz Tarkawian’s diptych comments on the phenomenon of militarisation and the ever-present tendency to develop the armed forces and participate in the arms race. The progress of advanced technologies coupled with scientific research from different fields leads to the creation of increasingly accurate methods of killing. The military industry is a very profitable branch of economy in many countries in the world. Tarkawian in his work juxtaposes two images. The first one presents the newest achievements in the global arms race, such as drones, robots or prototypes of laser guns. It is contrasted with the second image showing the consequence of their use. The artist asks a question about the logic of constantly improving weapons and using scientific progress to design more efficient ways of killing, and highlights the fact that the new solutions are currently being tested by various countries in real conflicts, in particular in the war in Syria, which has continued for over seven years now.

Mariusz Tarkawian (b. 1983) graduated from the Faculty of Art of Maria Curie-Skłodowska University in Lublin. Since 2005 he has been making closed drawing cycles that refer to events, thoughts, fantasies, or serve the role of reflections on art or current affairs. The artist observes, records and comments on reality by using pencils, crayons or pens to make thousands of quick drawings. The drawings, or just the contours, depict his friends, social events that he witnessed, emotions, gestures, overheard comments, opinions, reflections or ironic remarks. They are often accompanied by captions similar to chronicle entries.
description after: http://labirynt.com/autor/tarkawian-mariusz/ 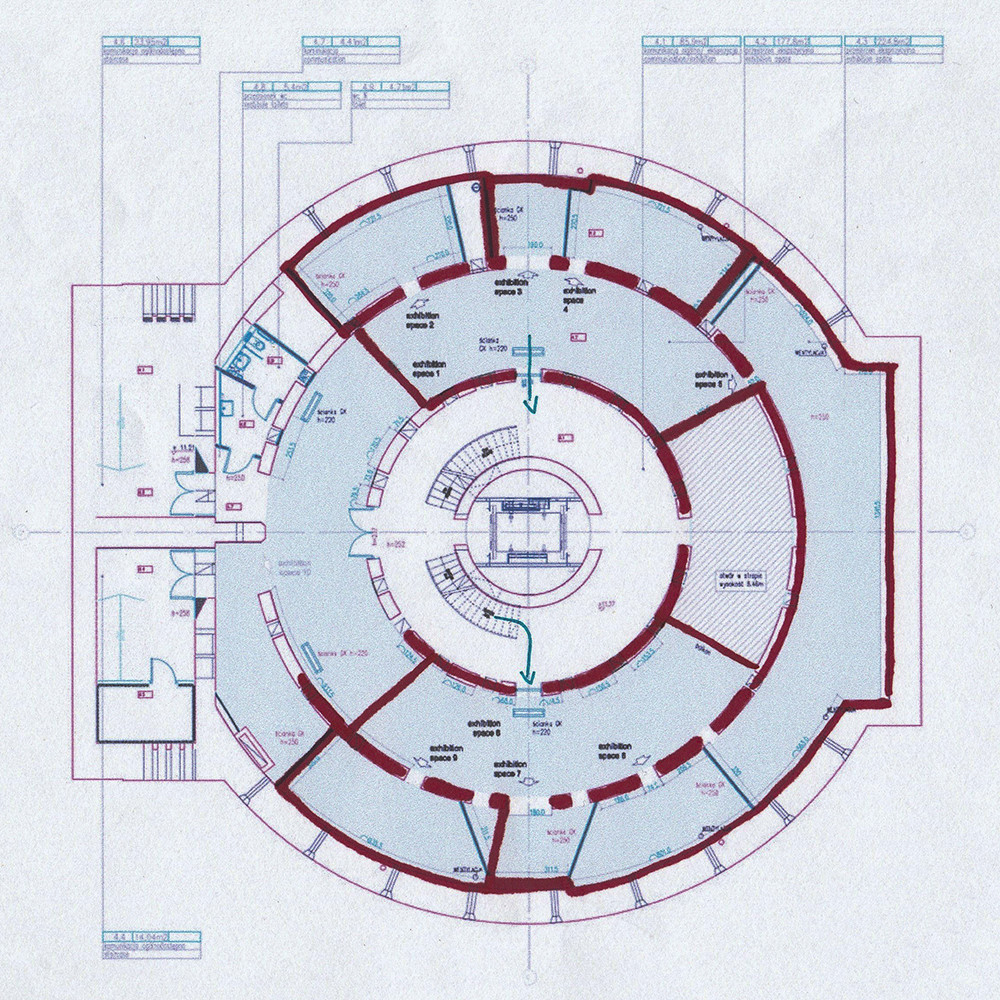 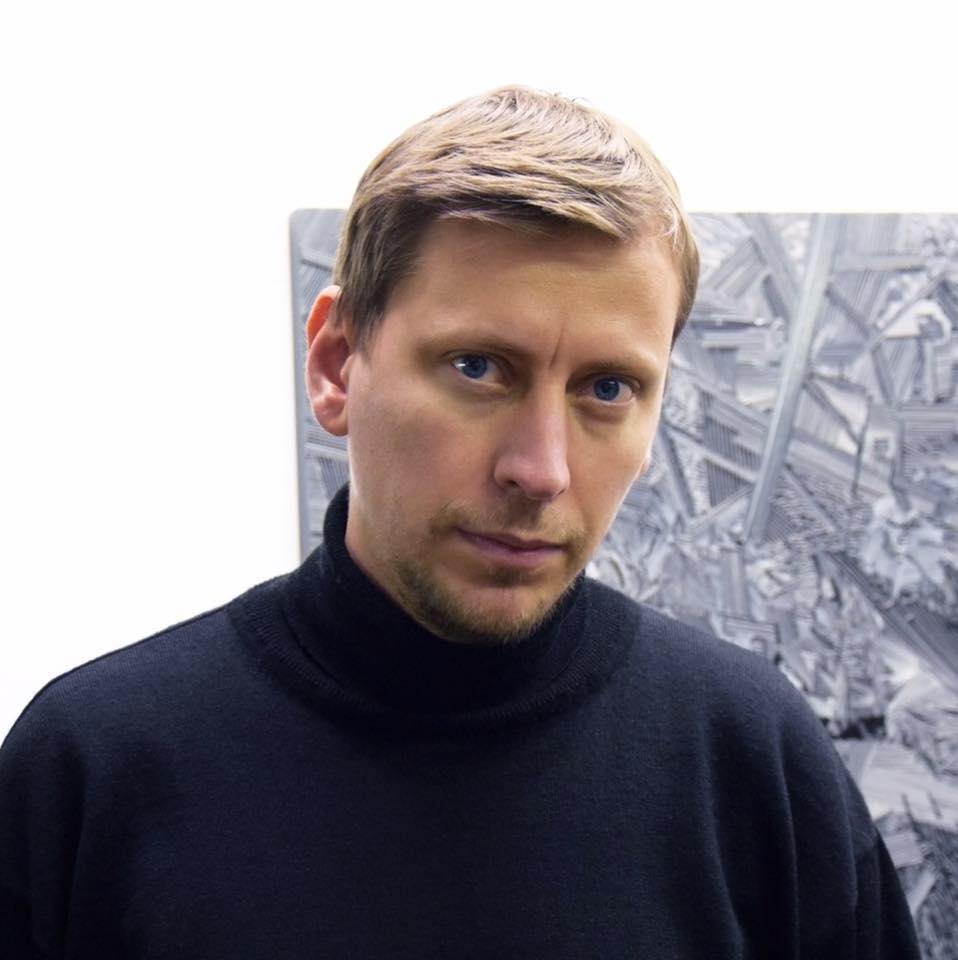 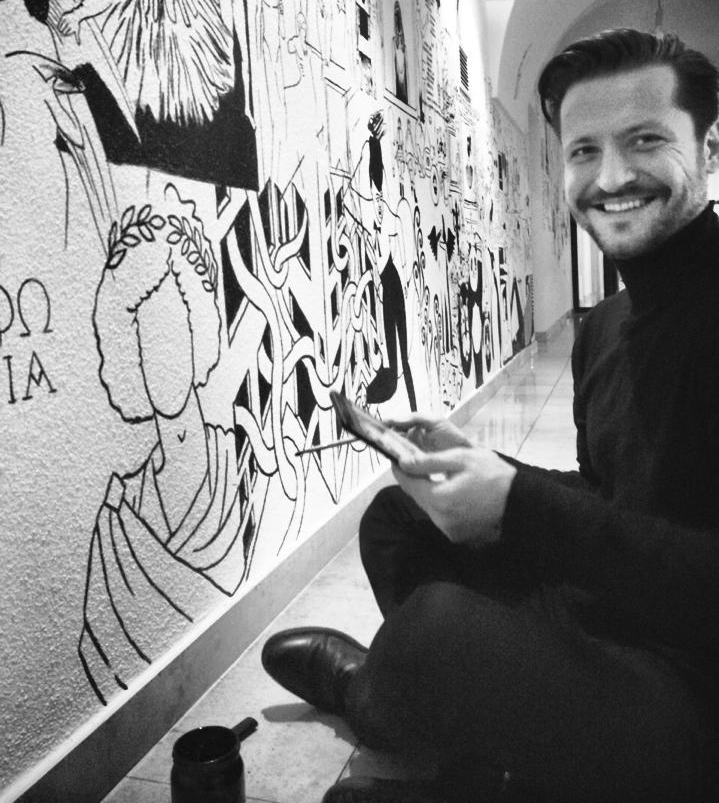