L/B duo (Sabina Lang and Daniel Baumann) designed the interiors of one of the shelter’s levels. The project by Swiss artists is called Beautiful Tube, and it’s their next spatial installation of a functional character. Earlier similar works by L/B include Hotel Everland – a traveling single-room hotel installed on a roof of the Museum of Contemporary Art in Leipzig (2006–2007) and Palais de Tokyo in Paris (2007-09); Infomobile, a mobile library at Kunsthalle Bern (1999–2001); Lobby at Kunsthalle in St. Gallen (2004–2007) and Beautiful Corner #1, a bar at Migros Museum für Gegenwartskunst in Zürich (1999).

Wrocław’s project Beautiful Tube has been conceived as a space contrasting with other areas of the museum, which itself is located in a II World War air-raid shelter – not only in terms of aesthetics, but also its acoustics. A construction mounted within the monumental and raw articulation of the shelter’s middle ring’s concrete walls confines the space in a soft multicolored carpet. Original silvery walls are hidden behind vivid RGB colors as well as black and white stripes.

In the Beautiful Tube, within the framework of the social program implemented by MWW, regularly hosts debates, lectures, film screenings and discussions. Beautiful Tube is also a place of workshops, conducted by the museum education department. 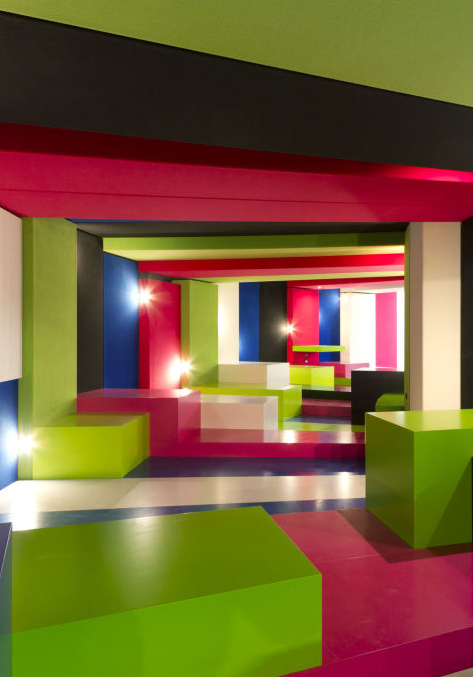