The cylindrical, free-standing air-raid shelter housing Wrocław Contemporary Museum was built in 1942 according to the design of Richard Konwiarz, a well-known architect from Wrocław. It is the largest among several air-raid shelters built for civilians at that time. All of them were given very interesting architectural forms, primarily in order to mask their real function. The remaining shelters are located in Stalowa, Ładna, Ołbińska and Białodrzewna streets.

The six-storey shelter in Strzegomski Square is 25 m high and with 1.1m-thick walls made from reinforced concrete. During the siege of Festung Breslau the shelter first served as a fortified hospital no. 2 (Festunglazaret II), and later as a resistance pocket. In the 1950s, during communism, a train of gypsy caravans camped behind the building. In the 1990s and early 2000s the shelter housed shops, warehouses and a pub. In 2010-2011 it underwent a major overhaul. Two teams of architects from the studios: CH + Architects and VROA Architects were responsible for the adaptation of the shelter to the function of the museum. Since 2 September, 2011, it has been the seat of Wrocław Contemporary Museum. 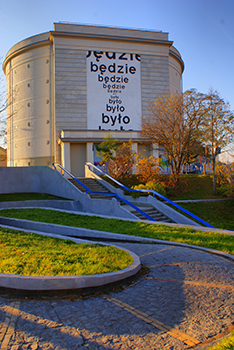