The display of the DIK Fagazine latest issue
Start: 30.3.12 (Friday), 7PM in Beautiful Tube / Afterparty: 8.30PM in Klub—Muzeum on the roof of the Museum

The construction site of the Wrocław Contemporary Museum (hopefully to be completed in 2016) stands on the debris of the most popular and longest operating crusing spot in Wrocław, a meeting place for queers of the “pre-emancipation period”.

Don’t stories and narratives of “those times”, from just moments before the symbolical end of a certain era, deserve a reconstruction? Don’t they deserve to be incorporated into the half-baked story of “Polish gayness”, a story still lacking ancestors, progenitors? What purpose would the revitalization of the memory of sexual heretics serve and can a project like that be successful? Can we imagine talking about the history of Poland before the discovery of the “gay man” (who, in Poland,
revealed himself/was discovered relatively late), albeit without employing the methods of ethnographic showcasing of a human artefact? Karol Radziszewski and Bartek Lis will talk to Juanita and Śledzik about the archaeology of
homosexual life in Wrocław prior to 1989, about identity and its lack, about queers and cruising spots. They will also ask whether all these paraphernalia have been successfully incorporated in “free Poland”.

DIK Fagazine is the first and only East-Central European art magazine focusing on homosexuality and manhood. This bilingual (Polish-English) magazine is addressed to everyone interested in art and men. It was established back in 2005 by the artist Karol Radziszewski and is currently distributed in a number of bookstores and galleries all around the world. So far eight issues have been published. The latest one, which will be presented at the Wrocław Contemporary Museum, is a result of numerous travels and meetings, during which the editors of DIK collected stories about “faggot lifestyle” in Europe before the fall of the
Berlin Wall.

Following the meeting, all participants are invited to
the “DIK after party”, which will take place on the roof of the Museum. Music will be provided by Deejay Sysło (mush ups, funk music, acid jazz, house, ’70 disco). 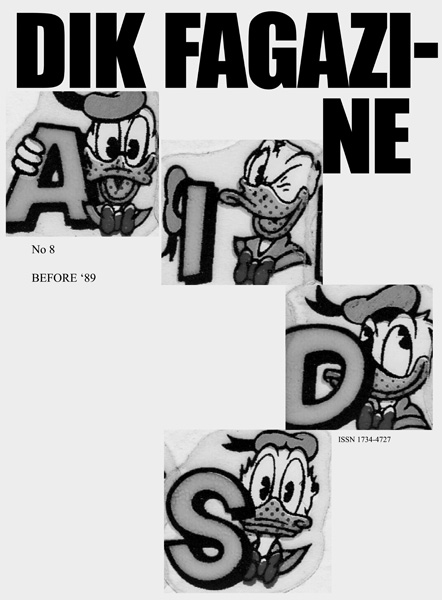