Declaring Wrocław European Capital of Culture has resulted in a shift toward culture as an area of social development. Culture has become important not only as a sphere of creating meanings, but also capital, including economic capital. As we know, the “deep culture” conception, which was propagated in Wrocław by Krzysztof Czyżewski, for some time brought hope to grassroots creative actions. Today, nine curators look after cultural projects in the city.

A question arises: to what degree do these projects build upon grassroots initiatives, and to what degree do they rely on huge events, exhibitions of Marilyn Monroe photographs or works by Salvador Dali or Pablo Picasso? Will the inhabitants of Wrocław become tourists in their own city, watching exhibitions and going to events, or will they be given an opportunity to get involved creatively? It has been long known that grassroots initiatives are the remedy to commercialization and privatization of culture. What remains problematic is the fact that we do not know whether such an opportunity will emerge. If that is to happen, a shift toward cultural activism must take place, which would ensure the proper interpretation of the needs of local communities where cultural actions occur.

Cultural activism cannot be an organised action, e.g. in the form of classes in local culture centers, but it must be connected with unveiling the needs of local communities. By definition, activism is more than just education; it is a shift toward social engagement, active observation of the social environment and acting in its best interests. Will Wrocław succeed in achieving such effects of cultural actions that will make the recipient more than a tourist in a commercialized world of images?

These questions assume additional importance in the context of the study titled “(Culture) Creators…” This report shows various culture-shaping attempts and intends to reflect on their role in the contemporary society. The authors of the report try not to fetishize grassroots initiatives in producing culture; they pose important questions concerning the role of institutions in grassroots artistic practice and in social engagement in art. At the same time, they reveal that culture and artistic practice stemming from it should be accessible to everybody because it can be implemented in different ways, in different places and by different people.

Because it was Wrocław that won the European Capital of Culture competition, it is worth thinking about the direction of preparations for this event. It is also worth analysing how the fact that culture was identified as a source of social development influenced the cultural policies of cities that lost this competition. 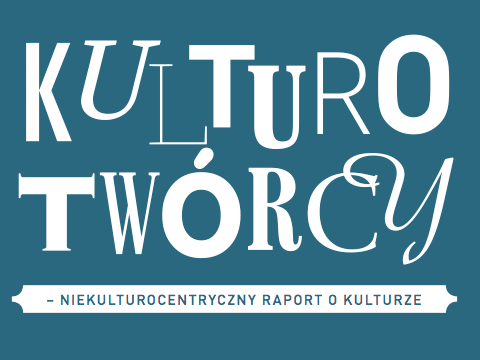