In the European traditional political and social thought, city is seen as agora and therefore a natural space for constituting different forms of collective self-determination, citizenship and society’s democratic participation. Even Karl Marx understood it this way, as opposed to the limitations of rural life. How to understand this affirmation of urbanity today, when for the first time in human history more than half of the world’s population lives in cities. Is it good news for freedom and democracy?

Researchers such as David Harvey indicate the role that the city and its space plays in the process of capital accumulation. The great boom on the mortgage market in the first years of the 21st century, which initially influenced a number of countries from U.S trough Ireland and Spain to China, ended up with the biggest crisis since the thirties of the 20th century.

In the era of reduced growth of key capitalist sectors, the city, and more specifically the monopoly rent squeezed out of it, has become an important area of capital accumulation. It is precisely the promise of benefits from monopoly rents that drives the policy of privatization of urban spaces, the main condition of which is atomization and depoliticization of urban communities. These processes, however, meet with increasing resistance.

Urban movements emerged precisely from this resistance to commodification of common goods, such as the city. Events that took place in 2011 around the world, with great occupation of city squares in Europe, America, North Africa and the Middle East, clearly showed the importance and power of urban movements in shaping the new policy paradigm based on democratic participation of urban communities. They also exposed limitations of urban movements forcing their participants to create coalitions with other entities that oppose the policy of ongoing commodification at a more universal level. Therefore the question is: will urban movements save democracy or will they rather become a victim of its crisis? 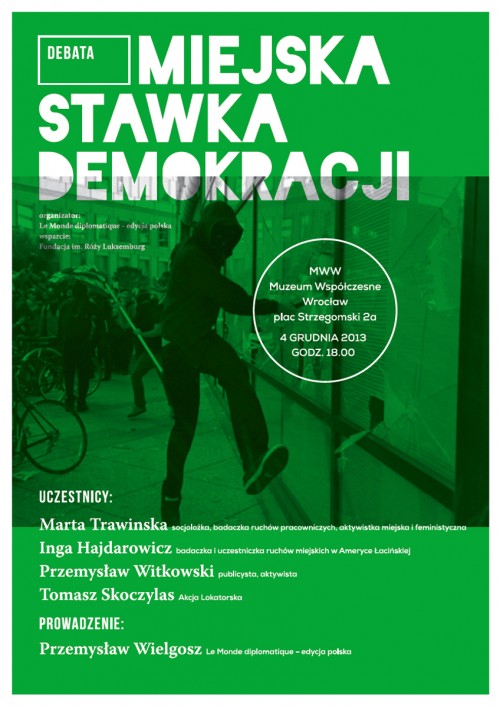