In 2001 three artists – at the time all students of the Warsaw Academy of Fine Arts – launched a mobile platform for artistic activity: the “Szu Szu flying gallery”.

It served Piotr Kopik, Ivo Nikić and Karol Radziszewski as a model for cooperation, presentation and communication, based
on an autonomous form of organization
and cooperation with other artists. The trio
has formed a group grounded in action,
with no permanent address, each time sparking
up a situation where art can spontaneously flourish
in a new, specific context.

“Szu Szu” functions as a formula for collective activity characterized by process, action and event.
The group’s primary field of interest is the city
and ways of maneuvering between reality and forms
of art, the significance of context and visual forms
for societal relations and for bringing about an open stage for communication.

Operating most often on the basis of a DIY strategy, they take on a range of the roles typically ascribed
to the art world system (curator, artist, critic, producer), while testing the boundaries
set by the ideals of professionalism and amateurism.

Its strategy avoids any unilateral designation
or definition – which in itself figures among the group’s founding principles. At the same time, “Szu Szu” represents one of the few remaining examples
in Poland of the relatively atypical “artist-run space”
– a gallery managed by the artists themselves.

This publication serves as an archive of activities carried out by “Szu Szu”, along with an interview
by Grzegorz Borkowski with Piotr Kopik, Ivo Nikic and Karol Radziszewski, and a glossary of terms arranged by theme drawn from the group’s activities, composed by a team of art critics and curators: Kaja Pawełek, Konrad Schiller, Stach Szabłowski, Kuba Szreder and Katarzyna Szydłowska.

Co-financed by the Minister of Culture and National Heritage 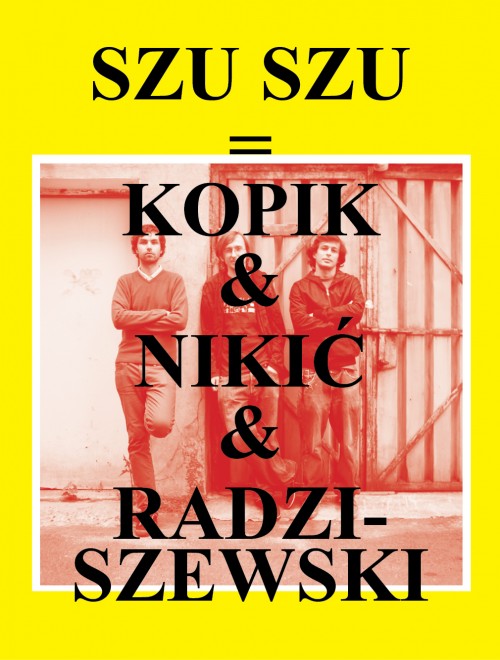