‘The Rainbow’ is an arch of triumph raised for art and everyday life, which usually consists of the whole color spectrum. The symbol of the rainbow is supposed to bring good fortune in important undertakings, although through centuries its ascribed meaning changed. In the ancient times it was considered a sign of heavens, the Greek thought that a rainbow was a smile of the goddess Iris. The Book of Genesis tells that rainbow is a confirmation of alliance between God and earthly life. Indians from the North America believe, that it is a special vehicle, a sort of a bridge between life and death. Irish version makes a plenty of people believe, that at the end of a rainbow there is a pot of gold. In the past, the colors of a rainbow on flags symbolized a new era, hope, social changes, peace on earth, and even, in Poland before the transformation – a cooperation.

Currently, rainbow is a symbol of tolerance and sexual minorities. 10-meter tall Rainbow made of 16 thousand fake flowers and 8 tons of steel was created to retrieve it for everyone, as pure beauty and joy that this multicolored phenomenon brings. During the construction of this temporary sculpture at the esplanade in front of the European Parliament the artist learned from a woman passing by – a Pole, who disliked the idea of creating a rainbow as a symbol of the Polish Presidency – that the rainbow should be “white and red!”.

The author will talk about the preparation of the ‘Rainbow’, an action in a public space within the framework of Polish Presidency of the Council of the European Union in 2011. The work by Julita Wójcik is one of the realizations of a project ‘Fossils and Gardens’, curated by Monika Szewczyk and prepared by the Adam Mickiewicz Institute in Warsaw.

‘À propos’ is a series of debates, lectures an meetings organized at WCM, which subjects are inspired by Polish Presidency 2011 of the Council of the European Union.

Julita Wójcik (born in 1971, Gdańsk) — an author of artistic actions. Between 1991—1997 she studied Sculpture at the Academy of Fine Arts in Gdańsk. Her works express a fascination with an ordinary life and are based on everyday activities. They are characterized by a sense of humor, light atmosphere and a desire to transform reality. The artist peeled potatoes in a gallery, set up 'My Garden' on busy junction, diving in a lake in Olsztyn she painted Watercolor, created crocheted miniatures of buildings. She was feeding bluebirds at feeders which form resembled artistic institutions with which she collaborated. 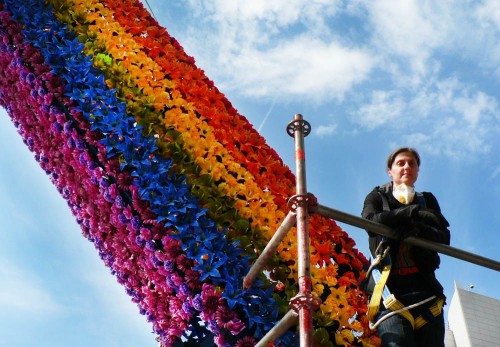