(Sunday), 9.00 pm, open-air screening on MWW roof, free tickets can be collected on the day of the screening from MWW ticket office from 6 to 8 pm

Wrocław Contemporary Museum invites you to a summer cycle of open-air film screenings in the Cinema on the Roof cycle. In the era of global influence of Hollywood, cinematography remains the most important organiser of the collective imagination. Iconographic representations penetrate our consciousness, and American suburbs, countryside or big city lights seem closer than ever.

The artists behind the North America exhibition – fans of Kerouac, the Coen brothers and David Lynch – embarked on a visual journey following in the footsteps of their idols. As a result, they created a story about the places and people they met on their way, consisting of photographs and short literary forms.

Thanks to the cult films of the counterculture cinema made at the turn of the 1960s and 1970s, such as Dennis Hopper’s Easy Rider or Richard Sarafian’s Vanishing Point, the convention of a road movie, which Krzysiek Orłowski and Jerzy Piątek adopt in North America, has become one of the most recognisable film genres.

Empty spaces along wide highways, roadside bars, dingy motels, old vehicles, soundtracks filled with rock hymns – all of it created the world of defiant heroes looking for freedom. As it was correctly noticed by Walter Salles, director of Motorcycle Diaries and a film adaptation of Kerouac’s On the Road, what distinguishes the most interesting road movies is that “the identity crisis of the protagonist mirrors the identity crisis of the culture itself.” [1] Their wandering, usually far from being successful, turns out to be a disappointing illusion of freedom, which they longed for so much.


In the film series accompanying the North America exhibition, we will approach its main “protagonists” – travel, photography, and above all the landscape of America – from a slightly different perspective.

We will start our journey in Nebraska – Alexander Payne’s comedy-drama (six Oscar nominations) in which an aged alcoholic Woody and his adult son set off on a journey to the eponymous state to pick up one million dollar of lottery winnings.

Then we will venture far to the west, to Zabriskie Point (the name of a viewpoint in the California Death Valley), directed by Michelangelo Antonioni, to look at the youth counterculture of the late 1960s.

The last stop summarising our film adventure will be Piotr Stasik’s A Diary of a Journey – a documentary tale of friendship between Tadeusz Rolke, a master of photography reportage, and Michał, a 15-year-old photography enthusiast.

Woody Grant, a grumpy aging alcoholic, wins one million dollars in a lottery. To pick up his winnings, he must go to the Lincoln lottery office, which is over 1,000 kilometres away. During the trip he is accompanied by his son David, absorbed in his own problems. The shared experience turns out to be both a bittersweet journey into the past and a foundation for their new relationship.

As Krzysztof Kwiatkowski wrote in his review, Nebraska is “an elegy for old America – simultaneously tender and funny, but also melancholically sad.” Payne slightly redefined the rules of the genre, choosing average inhabitants of the Midwest as his protagonists, but he did not abandon the visual determinants of the road movie – empty highways, roadside motels, pickups and depopulated towns where only the bars are open. Thanks to this, and thanks to Phedon Papamichael’s beautiful black-and-white photos, he managed to tell a warm, intimate family story, and at the same time to inscribe his film into a game of meanings, quotes and visual flavours pertaining to the history of cinema. 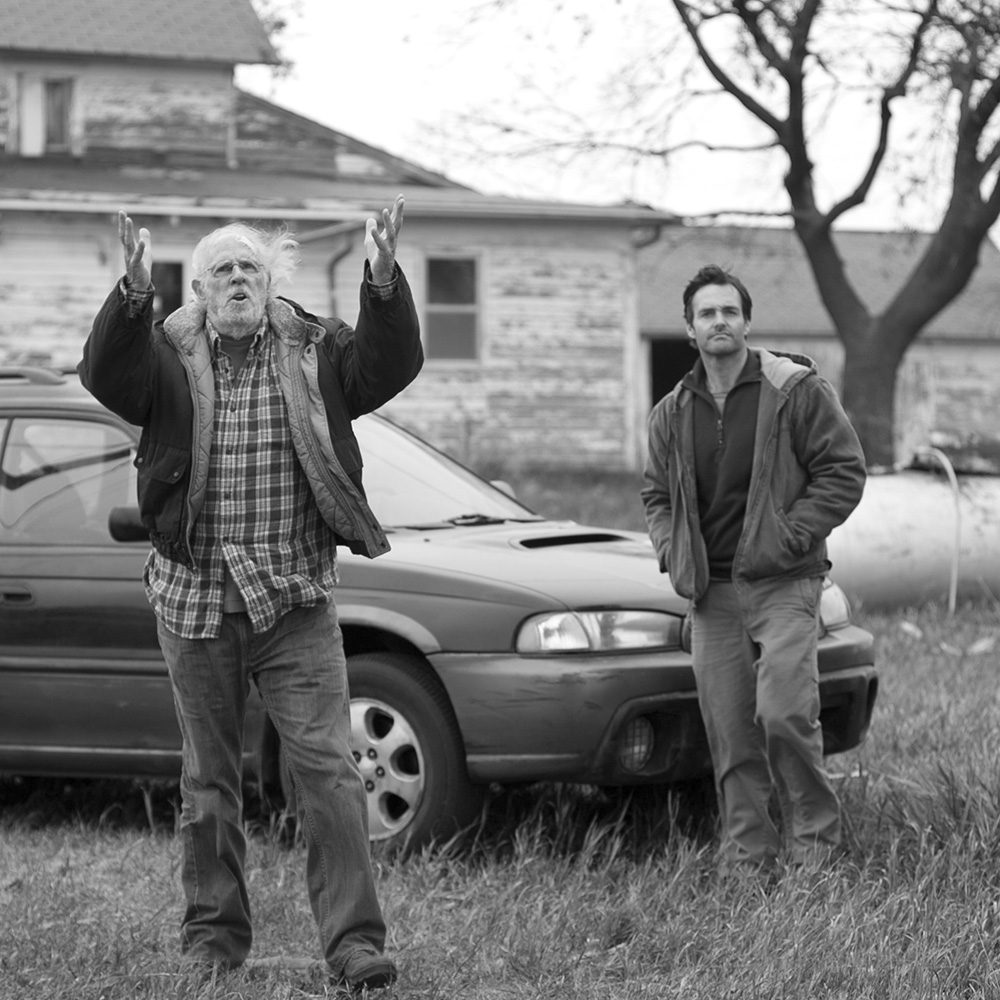 still from the film "Nebraska", courtesy of the distributor