“The region of Latin America does not lie in the centre of our attention. However, this is the stage of one of the greatest contemporary humanitarian tragedies – comparable with, and even exceeding in its size, the tragedy connected with the destabilization of the Middle East and the expansion of ISIS. Because of the lack of perspectives, tens or even hundreds of thousands of people (it is impossible to precisely estimate the scale of the phenomenon) are losing their lives trying to reach a country perceived as an oasis of freedom and wealth. Their plight is ruthlessly exploited by human traffickers, who demand a ransom from family members, force young women into prostitution and men – into hard labour. Sometimes, when the kidnapped people are considered worthless, they are simply murdered. The immigrants must also beware of the Mexican police, who are actually functioning in a pathological collusion with the criminal underworld. At the end of the chain there are the coyotes who promise to smuggle those fortunate enough to reach this point across the closely guarded border, without any guarantee of success and not necessarily in the safest place. Crossing the border opens up a new chapter of the drama, which rarely finishes with a genuine happy end. The world is blind and deaf to the tragedy. In Poland only the readers of Artur Domosławski’s reportages and a handful of experts in the region are aware of it.

Polish cinemagoers have recently been given an opportunity to “touch” the issue – the film “The Golden Dream” entered Polish cinemas on 20 March. It tells the story of three (or actually four – the number changes as the journey progresses) teenagers attempting to cover a trail which dwarfs the adventures of cowboys in the Wild West. Director Diego Quemada made every effort so that the picture ascetically reflects the difficult journey. He discretely outlines the problems plaguing Latin American societies. Sara, the only girl in the group, hides her femininity under a baseball cap, which she wears on short hair, and a bandage tightly wrapped around her chest – she knows that as a woman she is far more likely to fall victim to violence. The conflict between Juan and Chauk could be interpreted in terms of a sense of threat experienced by the former when his girlfriend developed a friendly relationship with a newcomer. However, it is not devoid of a racist sense of superiority of a white boy over a native.”
Fragment of Michał Żakowski’s review 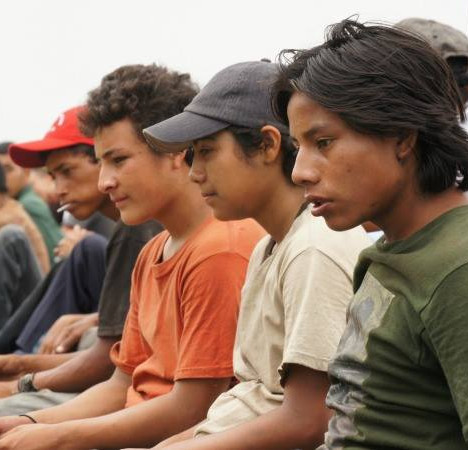