The current (temporary) seat of Wrocław Contemporary Museum was constructed in 1942 as an air-raid shelter. However, the building almost immediately began to perform other functions. In the 1990s, what is now MWW’s offices served as a cigarette warehouse, a sex shop or the “Bunker” pub. The screening of Wayne Wang’s “Smoke” will serve as a pretext for remembering and analysing that situation.

“Smoke” depicts the life of a small community in Brooklyn, New York. The stories of several men cross at a smoke shop run by Auggie Wren, played with bravado by Harvey Keitel. Every morning, Auggie take a photo of his store. Among his regular customers is writer Paul Benjamin (played by William Hurt), whose character is sometimes compared to Paul Auster, the film’s screenwriter. “Smoke” was made in the mid-1990s, and the role of Brooklyn in New York’s cityscape has significantly changed since then. Today’s Brooklyn is a Mecca for well-off artists while back then, it was Manhattan’s poorer cousin.

By organising a film cycle at the museum – a former air-raid shelter, we would like to pose several questions. Firstly, about the function of the venue and what determines it. Secondly, about the perfect conditions for watching films today – at the cinema? At home? Or perhaps in alternative screening venues? Thirdly, in a city where two art house multiplexes function, are people still dreaming of an old small cinema, just like the one they used to visit in the past? We will think about the answers in the first half of 2015 while watching cinematographic works referring to the complicated history of the air-raid shelter in Plac Strzegomski.

On 2 September 2011, Wrocław Contemporary Museum opened in the adapted interiors of the former air-raid shelter. After the fall of Festung Breslau, in the first years of the People’s Republic of Poland, a train of Gypsy wagons used to stop next to it.

The “Shelter” cinema. The third meeting in the film cycle: “Smoke”

Introduction to the film: Katarzyna Kajdanek 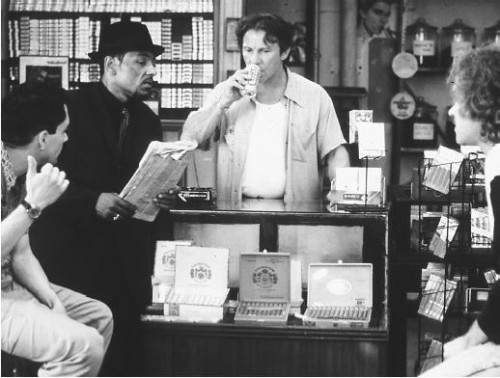