The film “Special Exploitation Zones” was produced by SzumTV and the Feminist Think Tank. Its makers go back to the late 1980s, when political transformation in Poland began. An important issue at that time was the debt incurred by the People’s Republic of Poland, and the need to obtain new credit to finance the transformation. Western governments, banks and international corporations posed a number of conditions, including the closure of big industrial plants, especially in the heavy industry. The stake in this game was foreign investors’ access to the Polish market.

As a result, a programme of economic changes was put in place, later termed “the shock therapy”, which led to bankruptcy, liquidation or privatization of state industry and agriculture. The shock therapy resulted in a rise of unemployment and poverty. Between 1989 and 2011, the number of jobs decreased by almost six million. The high unemployment, restricted access to social benefits and the uncertain forms of employment forced masses of people to work in despicable conditions, or to emigrate. It especially impacted on women from low and medium income households.

In 1994, the Polish Parliament passed a bill on the creation of special economic zones, which were supposed to alleviate the effects of the crises in industry and the labour market. In the Kobierzyce subzone near Wrocław, a plant owned by Chung Hong Electronics is situated, which is a subsidiary of South Korean LG Eletronics. In the summer of 2012, a group of 24 workers from the factory was dismissed on disciplinary grounds due to their industrial action. The workers demanded pay rises, the reinstitution of the Employee Benefit Found, and restoring to work a trade union activist who was illegally dismissed during the industrial dispute with the management of Chung Hong.

The documentary is based on interviews with the employees who talk about the reasons which prompted them to go on strike. Among them are the inhabitants of Wałbrzych and Nowa Ruda who are forced to commute tens of kilometers to their places of work in the Special Economic Zone. They talk about the difficult working conditions, hours-long commute, obligatory overtime, lack of free time, the daily struggle for survival for minimum wages, and their exhaustion resulting from the need to combine paid work with household chores and taking care of their families.

The screening will be followed by a discussion about the situation of women in the job market. Among the participants will be Magda Malinowska (the Workers’ Initiative trade union) and Małgorzata Maciejewska (a sociologist, author of the report “Exhausted bodies and precious products: women’s work in a Special Economic Zone for the electronics industry in Poland”). The discussion will be led by Łucja Łopatka (The March 8 Inititative). 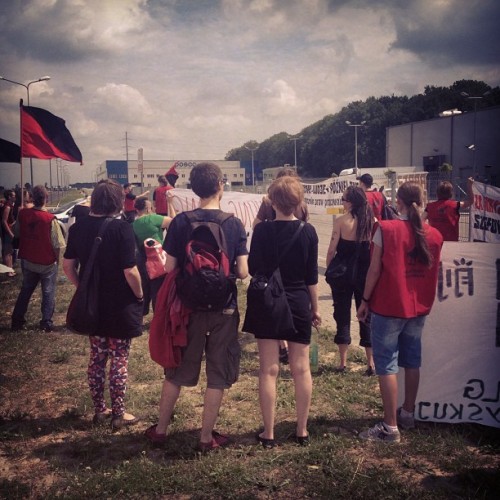