Bunkers at the coast of the Atlantic, like stone statues from Easter Island, look ahead with reserve. Defensive architecture made of concrete has only seemingly nothing to do with art, including this most contemporary one. Inspired by the dialogue between Lankes and Bebra – the characters from the pages of ‘The Tin Drum’ by Gunter Grass – we initiate a discussion on cultural institutions that chose to be located in former military buildings. We shall forget about wars that were a reason to for these strange objects to be raised, only these most permanent artifacts will remain. Some of them find their new landlords and become adapted for functions different than the original. Nowadays, bunkers and air-raid shelters, luckily deprived of their military roles, become venues for artistic activities.

Wrocław Contemporary Museum is located in a post-German air-raid shelter, commonly known as ‘Strzegomski Bunker’. We know a few places in Europe, where contemporary art collections are presented at post-military locations. The most interesting ones certainly include: a division of the Museum of Applied Arts in Vienna (MAK) devoted to contemporary visual arts (GEFECHTSTURM ARENBERGPARK associated with a nuclear reactor or a rocket launcher), Kunsthalle Recklinghausen, hidden between other buildings, or Berlin bunker designed by Albert Speer himself, giving ‘shelter’
to the art collection of Christian Boros. We will have an opportunity to listen and talk about the two latter ‘revitalizations’ during the conference held in Wrocław (Hans-Jürgen Schwalm, the vice-director of  Kunsthalle Recklinghausen and Jens Casper – the designer of the Borosa shelter’s adaptation confirmed their attendance).

On Saturday, 10th December at Wrocław Contemporary Museum we will be discussing the difficulties and challenges that the cultural institutions using ‘concrete’ post-war buildings are faced with. Exciting the imagination, quite often delighting with their architecture (sometimes even competing with the works exhibited inside), they bring whole network of meanings and sense into the story of contemporary art. Semantics of those places can be equally their asset and an undesired heritage, making curatorial work more difficult. On that day we also wish to talk about the best ways to use the exhibition-wise difficult space of Wrocław museum. Hard to arrange, the rooms of Strzegomski shelter require more attention, time, debate. To participate in our conference we have invited individuals experienced in ‘working’ with bunkers  (Hans-Jürgen Schwalm, Hans Günter Golinski), those who know how to plasticize disobedient objects (Jens Casper, Łukasz Wojciechowski) and who see them as a work of art (Iwona Bigos). Please familiarize yourself with the program and feel welcome to visit the Museum on Saturday, 10th December.

Iwona Bigos – art historian, cultural studies graduate and curator of art. Born in Wrocław, for 18 years has lived in German city Bremen. Among her best projects are ‘Licht(h)aus’ – an exposition with contribution of Polish and German artists. Since 2009 director of Gdańska Galeria Miejska, where in 2011 she has arranged and produced an exhibition titled ‘Bunkers – mystical, barbaric, bored’.

Jens Casper was born in Cologne, Germany, in 1967. Studies in architecture at the RWTH, Technical University in Aachen, where he graduated in 1998; until 2003 he was employed in several architects offices in Berlin, Cologne and Aachen, and worked on the building design for governmental administrations & media corporations such as the German Embassy in Tokyo, Kirch Media Group in Munich and DeutschlandRadio in Berlin. In 2008 Jens started new collaborations, and to run an independent office: Büro Jens Casper based in Berlin-Kreuzberg. He’s a founding partner of Casper Mueller Kneer Architects Ltdest. 2010 based in London and Berlin. In 2010 he held a lectureship at Berlin Technical University and he currently holds a Guest Professorship at the Brandenburg University of Technology Cottbus. Since 2007 he’s a member of BDA, Bund Deutscher Architekten / Association of German Architects, in 2010 he was a member of the Konvent der Baukultur der Bundesstiftung Baukultur. He lives in Berlin, Germany.
Hans Günter Golinski studied Art Education at the Wuppertal University and History of Art, Archaeology and German Philology at Ruhr-University Bochum, taking his PhD in 1985. He was scientific curator at the Museum Bochum from 1989 on, and has been its director since 1997. Golinski is a curator and editor of national and international publications and exhibition projects on 20th and 21th century art with an emphasis on interdisciplinary concepts.

Hans-Jürgen Schwalm – graduated in history of art, archeology and philosophy from Universität Bochum; co-founder of private  institution: Ausstellungsforums BauHaus-Fischer, Wuppertal (1988); PhD Thesis on group portrait in XX century; starting from 1990 care-taking director of Kunsthalle Recklinghausen; curator and author of many exhibitions and articles on contemporary art.

Łukasz Wojciechowski (1978), architect is representing VROA Architekci and CH+ Architekci responsible for the convertion of the anti-aircraft shelter into the Contemporary Arts Museum in Wroclaw. Assistant professor at Faculty of Architecture, Wroclaw University of Technology.

16.00
Opening of exhibition:
Design projects of shelter – works of students of Academy of Art and Design in Wrocław and The Wrocław College of Humanities


19.20–19.40
Strzegomski air-raid shelter in the times of Festung Breslau and after (Łukasz Wojciechowski) 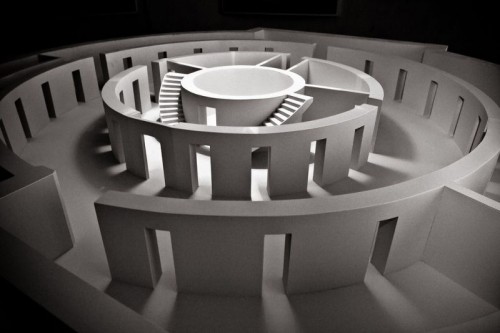