In March, a group of students of the SKIBA (State Higher School of Culture Animators and Librarians) submitted their idea to the MICROGRANTS competition. The project titled “My Photo-surroundings” gained the judges’ appreciation and is currently being carried out in the Szczepin housing estate in Wrocław. It is based on a very simple idea of conducting a series of workshops with the inhabitants of one block of flats in Szczepin. As a result, a scale model of the block with photographs taken by the residents will be made.

The students justified the need to spend money on their project in the following way: “A decade or so ago, if I had been asked me who my neighbour was, I would have gladly responded that it was somebody close. We knew each other and we met frequently. Today I no longer know if my neighbour is a man or a woman, what they look like and what they like. Do you know who lives on the other side of the wall? We don’t know our neighbours or neighbourhoods. We are always in a rush, and when we slow down, we lock ourselves up at home. It is increasingly difficult for us to communicate. We are afraid there is nothing to talk about – there is no need to talk about money while politics is a frightening subject. We suggest talking about a safer topic, which will surely stimulate the community and help them find the local identity”.

Wrocław Contemporary Museum has been cooperating with SKIBA students for three years now, helping them to carry out projects that animate the local community.

We would like to invite you to the project finale and a feast with neighbours.

We will see the effects of the work, taste delicious food and talk about “living in the blocks”. 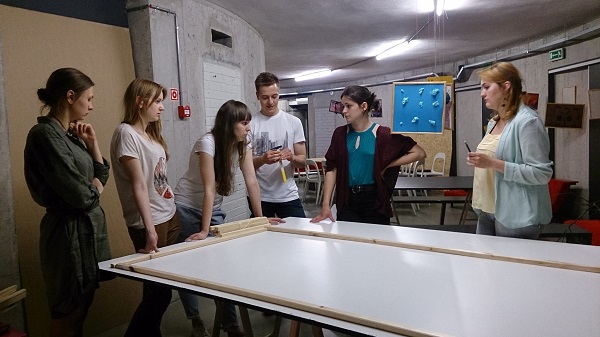