Many Holocaust survivors think that abilities to survive were different in women and men. Very often females would “outlive” men. The thesis that women could have better capabilities to survive than “the stronger sex” is based on the assumption that men were much less “skilled” in everyday life. They did not know how to do the laundry, sew, cook, care for their living place or, last but not least, groom themselves.

Women’s diaries from the period of Holocaust very often contain descriptions of personal care and hygiene, everyday cleaning, taking care of one’s looks. For men these activities were of no importance – what they cared about were fight, politics, religion, ideals, community, “deed” in the romantic sense and ‘high culture. By contrast, women nurtured what was everyday and even “invisible” – so ordinary that it tends to go unnoticed. However, in the conditions of the state of emergency even the most mundane activities would become heroic deeds –they were to save “normality” from the period of peace in the epicentre of wartime. That was women’s everyday resistance.

Experiences of women during Holocaust have also proved that practices used by women to “perform their femininity”, construct their gender, only superficially seem to be oppressive. The Second World period demonstrates that seemingly meaningless activities such as make up, fashionable clothes, maintaining an attractive look – in reality often provided the ability to preserve one’s human dignity. Seemingly trifling behaviour of women turned out to be subversive. Thereby female heroic narration, although constructed in a totally different way than the male one, has become at least equivalent to it.

Karolina Sulej – a PhD candidate at the Institute of Polish Culture, University of Warsaw, freelance journalist, who mainly writes for Wysokie Obcasy and Przekrój magazines. This year’s curator of an experimental section Month of Fotography in Kraków. Her doctoral thesis will focus specifically on fashion in concentration camps. 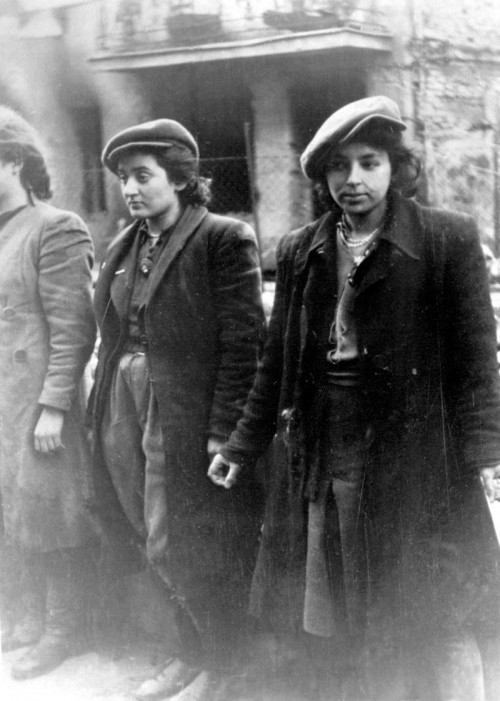 Photo: from Jürgen Stroop’s Report prepared for Heinrich Himmler from May 1943. Women from Jewish movement caught with gun in hand. Among them Malka Zdrojewicz ( to the right), who survived the Majdanek extermination camp.