Belyayevo, an ordinary Moscow residential area, should be given the status of a monument. This painfully standard accumulation of towers blocks was erected as part of Khrushchev’s grand housing programme, which was initiated in 1954, and the buildings and spaces between them are seemingly identical to thousands of other housing areas from that time. However, Belyayevo is special – it witnessed the emergence, heyday, and vanishing of Moscow conceptualists. Its architecture permeated the lines of their poems, it was immortalised in their graphics and performances. Can this unique non-material heritage be the key to protect typical architecture?

Kuba Snopek’s book Belyayevo Forever. Preserving the Generic was published in English and Russian by Strelka Press in 2013. It was the result of the Belyayevo Forever project, which was coordinated by Rem Koolhaas at the Moscow-based Strelka Insitute in 2011. A cultural programme titled Autumn in Belyayevo ran parallel to it, organised by a local art gallery. It was intended to popularise the legend of the microdistrict, which would lead to the integration of the local community and eventually to including Belyayevo in UNESCO’s list of monuments.

is an urban planner and researcher of architecture. He graduated in Architecture from Wrocław University of Technology and from the Strelka Institute in Moscow, where he is currently employed. He participates in research projects concerning urban planning, housing and architecture of the 20th century. He began his career as a researcher at Bjarke Ingels Group, and in Moscow he cooperated with Rem Koolhaas on the issues connected with the protection of monuments. He has written extensively on architecture and worked as exhibition curator and lecturer. He is a co-owner of the Ukrainian pub KRES, which has recently opened in Wrocław 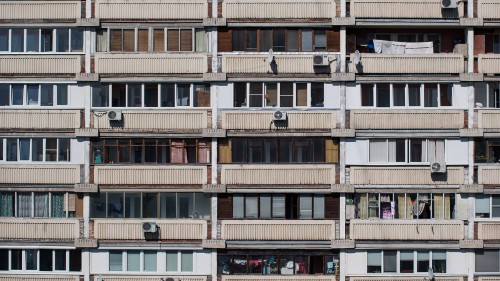