The phenomenon of Young British Artists (YBAs), despite the group’s huge success on the international art scene, has not been researched and described by any Polish art historian. It is a shame, because 20 years after their loud debut the numerous motives that have shaped the nature of this phenomenon are still a starting point of many actions undertaken by curators and art critics, attempting to grasp the complexity of visual culture’s panorama.

The work of Young British Artists, that has determined the ways of development of the most recent art since the end of the 1980s, has at the same time established a new hierarchy in the structures of marketing and art market, undermining one of the most inviolable paradigms, in which it is only the artist-master who achieves success. Young and very bold provocateurs, above all due to the open opposition against the institutional – museum hegemony, formed a space for the next generations of artists who uncompromisingly combine the traditional with the modern – often considered as an abject aesthetic, trash or camp, but also with what is common, intimate and ephemeral.

YBAs art is analyzed from the perspective of two (reoccurring, as a matter of fact, through the whole period of postmodernity) questions:
Can anything that is ignoble and does not fit the classic canons obtain a status of a work of art? What marketing strategies lead the debuting artists to success?

Nowadays, it is also proper to consider these complex works, strongly embedded in a social context, applying the theory of relational aesthetics of Nicolas Bourriaud which, apart from situating art in a particular time (and social conditions related to it), will allow to reveal its role in representing, establishing and maintaining interpersonal relations.

The lecture is one of the cycle "On the Agenda". 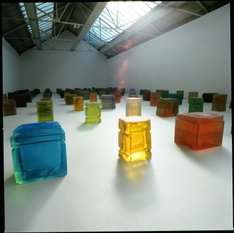