How big is the power of human tales? Are ‘small narratives’ a strategy of resistance? Deconstruction of discourse? – how successful? And how does it relate to gender, body and Polish sex?

The starting point of the presentation, and then the discussion, will be the stories put in a book by Marta Konarzewska and Piotr Pacewicz ‘Forbidden loves. Sexuality and other taboos’. Gay, lesbian, transgender, sado-masological, polyamorous and queer – written in defiance of the knowledge-power of the ‘great narrative’.

‘Hetero- city. But in fact – just bi. You know: “I’m so cool, I go to parties, I smoke weed and I know how to fight, if necessary. With just one difference – I like to kiss guys too’.
(‘Forbidden loves’, ‘Lova, lova and such matters’)
***
‘I call the guys that I like ‘missters’, the singular is “misster”, it designates something noble’.
(“Forbidden loves”, “Dandy”)
***
– During the celibacy I decided that being a man does not totally suit me.
– A man – gay?
– A man in general.
(“Forbidden loves”, “Her perfection”)
***
For the parents it is like the dream has finally come true. The guy finally has a woman. But it turns out that it’s not that simple, if the woman likes me in a dress.
(“Forbidden loves”, “The wedding of two women”)
***
When I met Natasza I felt at once that this “she or I” is just baloney. Nothing happened. I still love Gośka and I am simultaneously falling in love with someone else.
(a fragment of the interview for the publication on poliamory)
***
“Trans is in each of us, because stereotypes on gender and sexuality are illusive”
(“Forbidden loves”, “We’re all trans”)

If both – norms and labels sustain the illusion, maybe it is a strategy of “small narratives” the chance of a great resistance?

Maja Konarzewska (1977) is a polonist, literary critic, culture researcher focused on queer studies. An author of the renowned text 'I am a teacher and I am a lesbian' in 'Gazeta Wyborcza'. The vice-chief editor of 'Furia' – a lesbian-feminist magazine. Co-author of a book 'Forbidden loves. Sexuality and other taboos'. 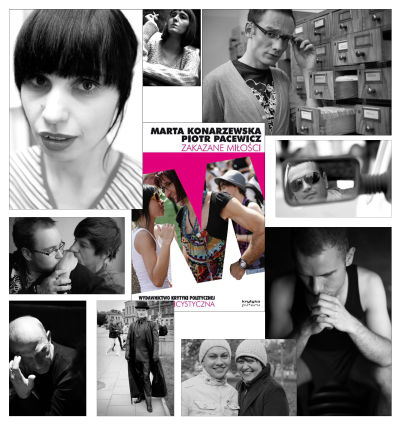