At least for a decade, Central Europe, which has been co-shaped by Slovaks for centuries, has been paying increasing attention to this nation’s unacknowledged culture. As if it didn’t believe its eyes that Slovakian achievements have been so original and attractive, multidimensional and full of tension in various spheres of ideas and representations.

The Wrocław meeting is intended to acquaint the audience with the main notions in Slovakian literature, painting and graphic art of the first half of the 20th century against the historical, political and mental background. This succinct review will revolve around the oeuvre of some of the most well-known and talented artists of this period, with Pavol Országh Hviezdoslav (1849-1921) and Ľudovít Fulla (1902-1980) prominently present among them. Knowledge of their work in the context of geocultural contextualization is undoubtedly a lodestar for understanding Slovakian contemporary art.

Michał Burdziński has graduated in Comparative Literature from the Jagiellonian University in Cracow and is currently working on his PhD thesis at Warsaw University. He has received a scholarship from the National Science Centre of the Slovakian Academy of Sciences in Bratislava. He is an advocate for the idea of Central European cultural community in all its temporal and spatial variants, with particular emphasis on literary and artistic formations of Modernism (1890-1940). He is an enthusiast of “forgotten places” between the Bohemian Forest, Chornohora, the Baltic Sea and the Balkans

The meeting is held as part of the ETIUDA scientific scholarship (2014/12/T/HS2/00437), awarded to Michał Burdziński by the National Science Centre in Cracow 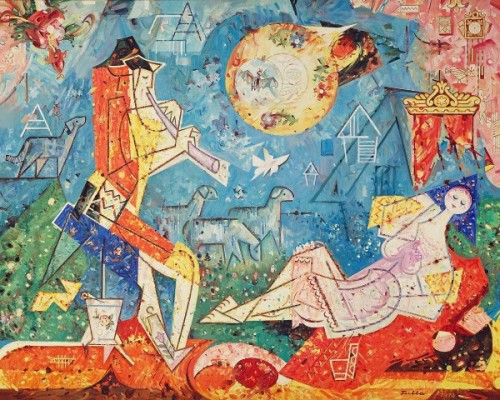