You are kindly invited to the opening of the
exhibition ‘Bunkers. Mystical, Barbaric, Bored’ on 27th January (Friday) at 7 PM
at Wrocław Contemporary Museum, 2a Strzegomski Sq.

“The exhibition ‘Bunkers. Mystical, Bored’ illustrates my research and experiments on the theme of bunkers as an architectural artefact and a source of artistic inspiration.

The quotation from ‘The Tin Drum’ by Günter Grass was a starting point for me in terms of the question of why and in what way these military objects became a place for artistic actions. I was delighted how Günter Grass used that light story about Bebra’s front-line theatre at the Atlantic Wall as the main argument in his discussion about modern art.

Three artists – Magdalena Jetelova, Joanna Kosowska, Ricardo Stein – were invited to participate in this exhibition and in their works they continue the discussion started by French theoretician of culture – Paul Virilio – on the existence of military space and its meaning for modern society in a more or less literal sense. All the artists used this theme and put it through their own artistic processing. And even though everybody decided on the same means of expression – photography – the result of the work differed significantly.”

Iwona Bigos – Curator of the exhibition 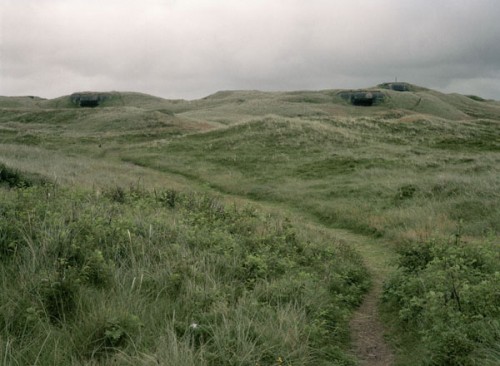