As a part of 8th edition of Brave Festival titled “Women Initiation” there will take place an exhibition of dot painting which is a permanent and notable contribution of its creators to contemporary Australian culture and art. This form of expression brought about the revival of Aboriginal culture and won widespread acclaim for the art of indigenous inhabitants of the continent. Dot painting presents stories of creation which are deeply rooted in the culture and tradition of Lajamanu and northern Warlpiri people. The chief element of Warlpiri culture, law and spirituality is “Jukurrpa”, often translated as “dreaming.” Artists paint their dreams referring to a place, country, ancestors and many ages of tradition which, together with songs, rituals and dances, belong to the same narrative. Today, women are the dominating force among the artists. They paint secular motifs related to storing food or teaching young girls their future duties as women and wives; they also create works about women’s ceremonies and myths (Dreamings). The exhibition will feature works of such Aboriginal female artists as Marie Abbott-Ramjohn, Alison Furber and Therese Ryder.

A special accompanying event will be a ceremony led by a group of Warlpiri women from “Warnayaka Art Centre” in a small town of Lajamanu on the northern outskirts of the Tanami Desert. The artists will also host art workshop on dot painting.

The owners of works are The Leon Wyczółkowski District Museum in Bydgoszcz and Jolanta Wolski and Henryk Sikora. 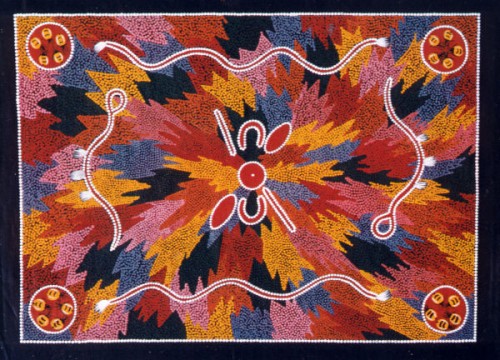