The artist (b. 1983) – a graduate of the Department of Graphic Arts of the Eugeniusz Geppert Academy of Fine Arts and Design in Wrocław, and since 2009 its employee – studied under Andrzej Basaj and Eugeniusz Get-Stankiewicz. A painter and above all a drawer, he is not afraid to use his fingertips to spread charcoal directly onto a corrugated sheet of Fabriano paper. By avoiding tools such as art sticks or holders, his practice becomes enriched with the sense of touch. Feeling the sheet and modulating its surface by hand resembles a sculptor’s habit of checking the texture of stone, the warmth of wood or the density of clay. The artist is guided by intuition, effortlessly removes the unwanted traces or imperfections, leaving solely the jet-black pigment. Thanks to subtlety, precision and finesse Grulkowski has achieved technical mastery. His preferred formula of depiction only adds to the illusionary character of his works.

The upcoming exhibition of works by this virtuoso of drawing (winner of the President’s Prize at the Biennial of Drawing in Pilsen (2008), holder of multiple scholarships from the Minister of Culture and National Heritage and the Municipality of Wrocław, whose presentation was enthusiastically received at the Academy of Fine Arts in Beijing) comprises selected pieces belonging to the series Finding the Order of Things and Sections of Cloud Interiors. By imitating smooth materials and sensual textures, the artist explored in them the surfaces of ordinary things, the morphology of mysterious substances and rather unspecified tissues. His most recent cycle, bearing the intriguing title The Secret Life of Molecules (2015–2017), focuses on an unusual field. Arranged linearly in binary or ternary systems, rows of points, dots, drops or spots trigger associations with a code, the Braille alphabet or perforated cards. In a way, they pertain to Mystery, to that which is indeterminable and surprising, and yet characterised by melancholic beauty.

The exhibition is accompanying by a catalogue with numerous reproductions.

The artist’s drawings focus on peculiar creations, surfacing to the fore through sharp chiaroscuro. In the series Clouds they resemble some elaborate, monumental organic structures, accumulated or sectioned rocks, or, as the title suggests, cloud interiors. In the cycle Molecules, the dark circular elements, whose contours are often blurred and accompanied by long smudges that hint at movement, look like nebulae seen through a telescope, mighty planets or clusters of meteors, or perhaps microscopic close-ups of a matter that really exists. Other works depict forms that are directly evolving into specks or grains of rock. But it is not the fact that the creations trigger various associations that makes them non-abstract. Their non-abstractedness is due to the way of depiction […]

In Clouds, white figures emerge from impenetrable darkness. These figures, revealed by light coming from above that exposes their contours, both wavy and sharp, highlighted by the cast shadows, not only come to the fore, but literally seem to be breaking through the surface of the drawing and bursting into the viewer’s space, positioning themselves within the reach of hand. The experience of their spatiality is enhanced by the fact that our eyes are drawn to the dark cracks opening up between them. One almost forgets about the surface separating us from them. We could only become aware of it be attempting to grasp them, or swipe the finger against their cutting edges. This way of exposing the white forms translates into a feeling of communing with something real. It is impossible to think about them simply as illuminated, hard – or perhaps very soft, protruding forms, wafting like seaweed.

Also in Molecules, the depth of the image is highlighted by a strong beam of light. It illuminates a greater part of the drawing and unveils black spots previously hidden in the all-encompassing darkness. Small and blurred circles are hovering in the distance, slightly larger and darker ones in the middle, and in the foreground – gigantic, black rings. Their mutual arrangement turns them into a rain of objects falling upon us, whose onslaught is only stopped by the glass in between. They are endowed with unusual yet fleeting vitality. In other works from the series, the rain of black rings forms concrete sequences resembling embossed boards with Braille characters.

Grulkowski’s creations are utterly otherworldly, yet they have been endowed with concreteness and tangibility. It makes them look as if the artist’s intent was precisely to breathe life into them. Although they are drawn formations, their existence exceeds that of a phenomenon and borders on the material. All these observations lead to a preliminary conclusion about the source of the peculiar influence of Grulkowski’s drawings. It possibly stems from the blurring of boundaries between the “abstract” order and the undoubtedly material character of the creations. 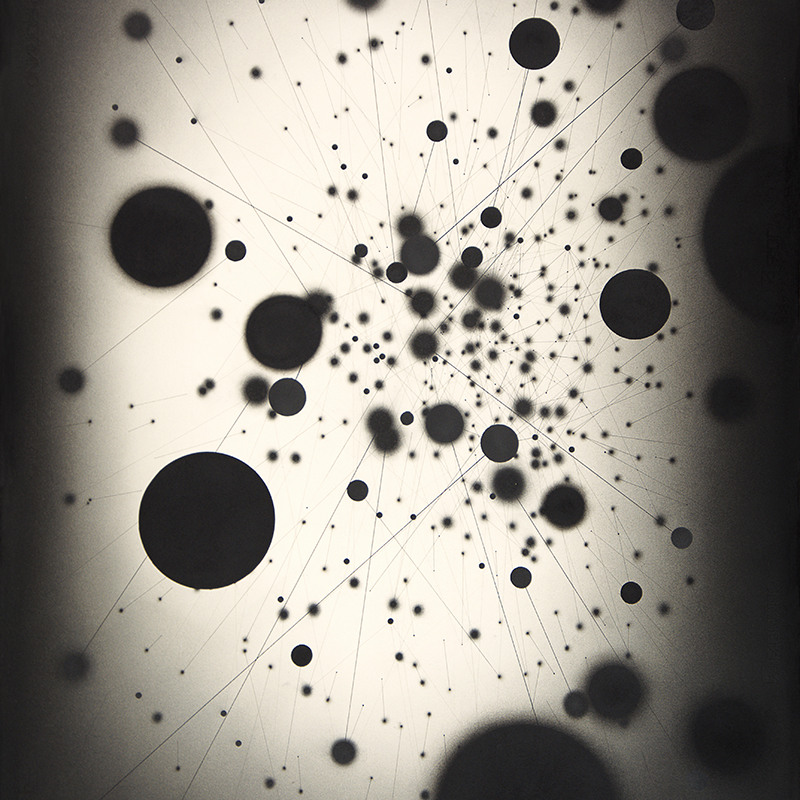 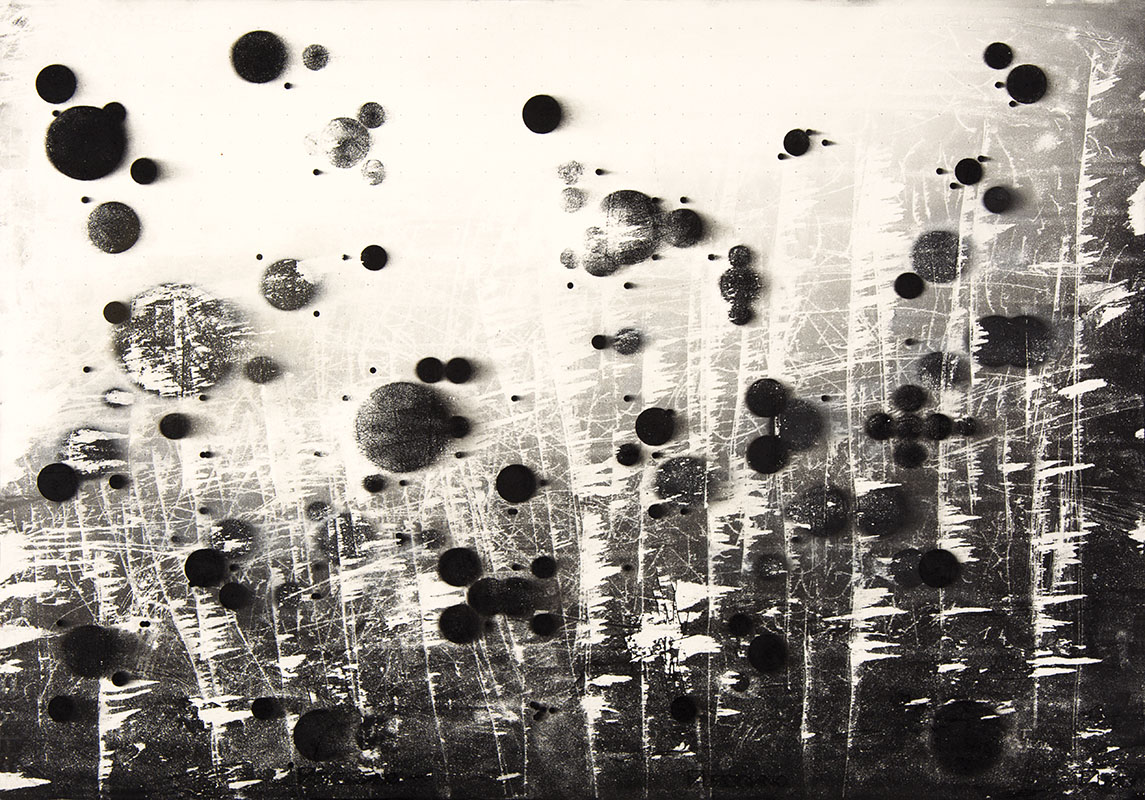 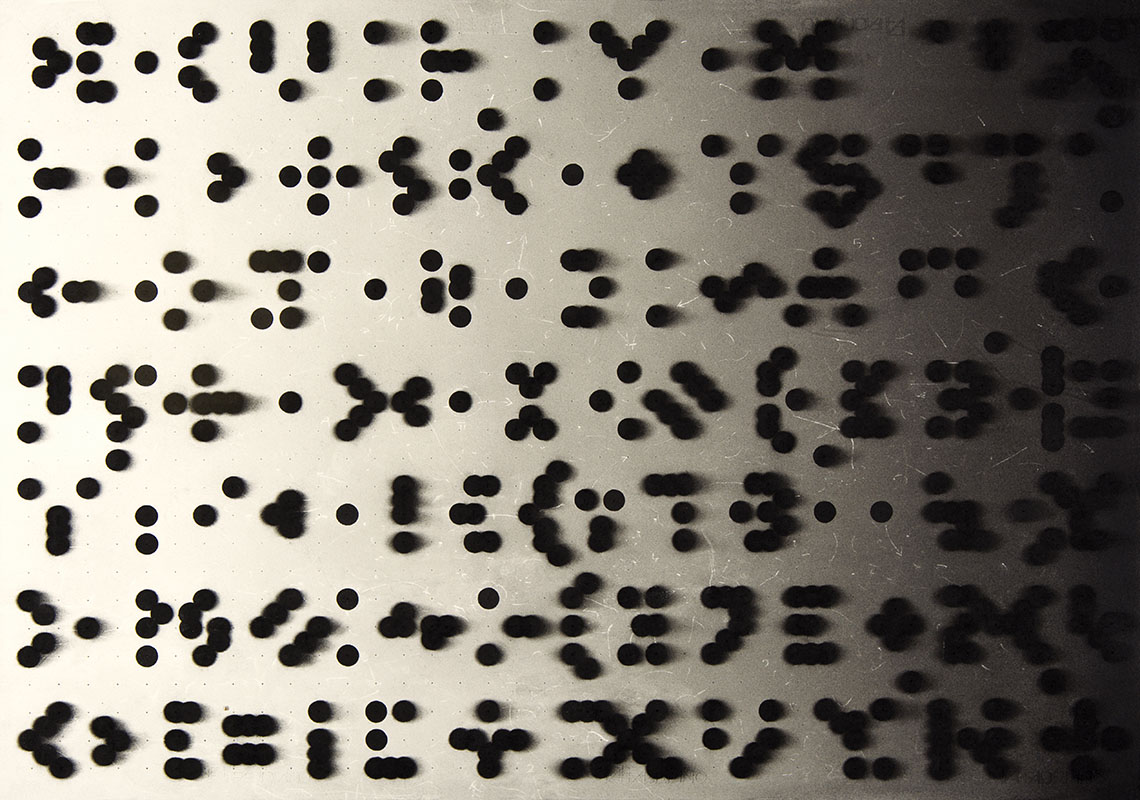 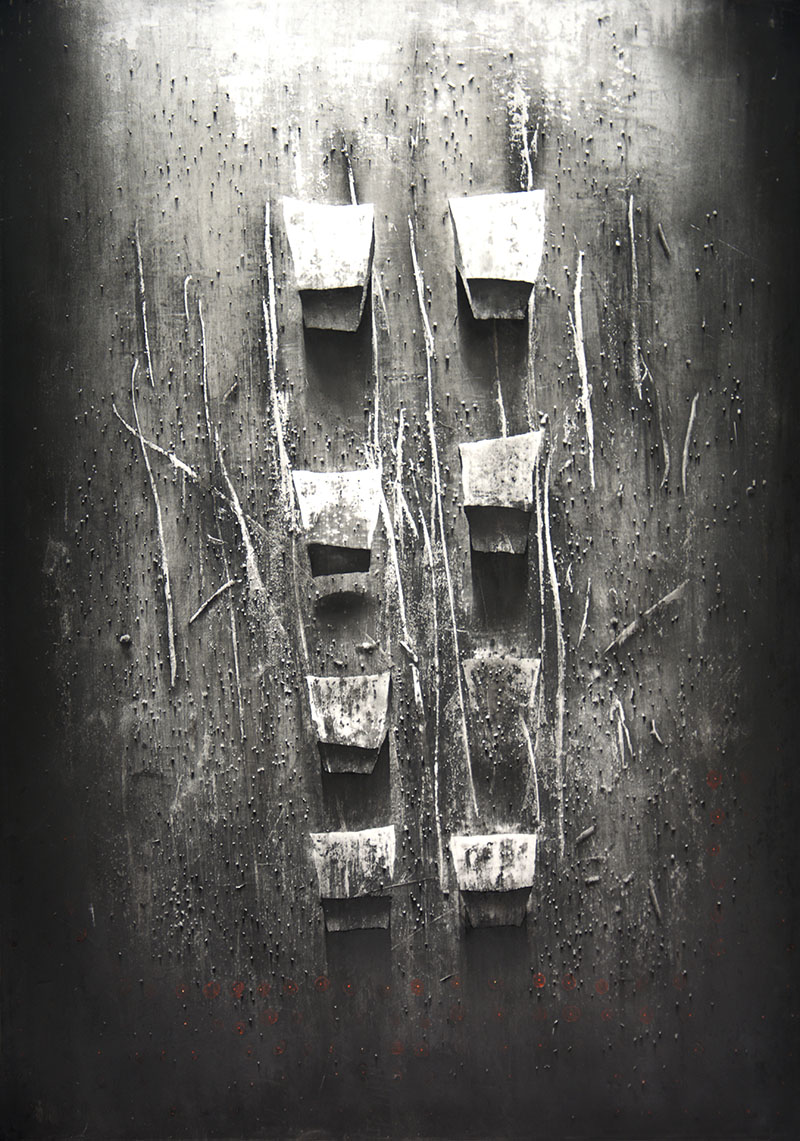 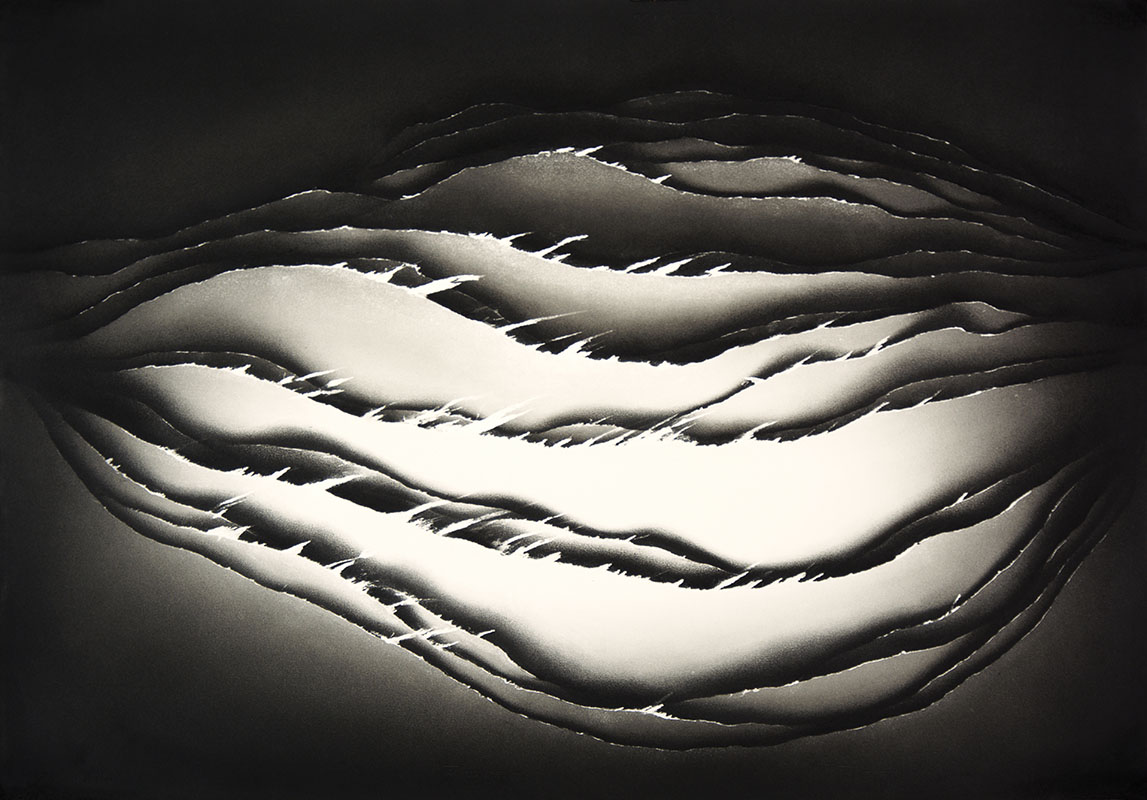 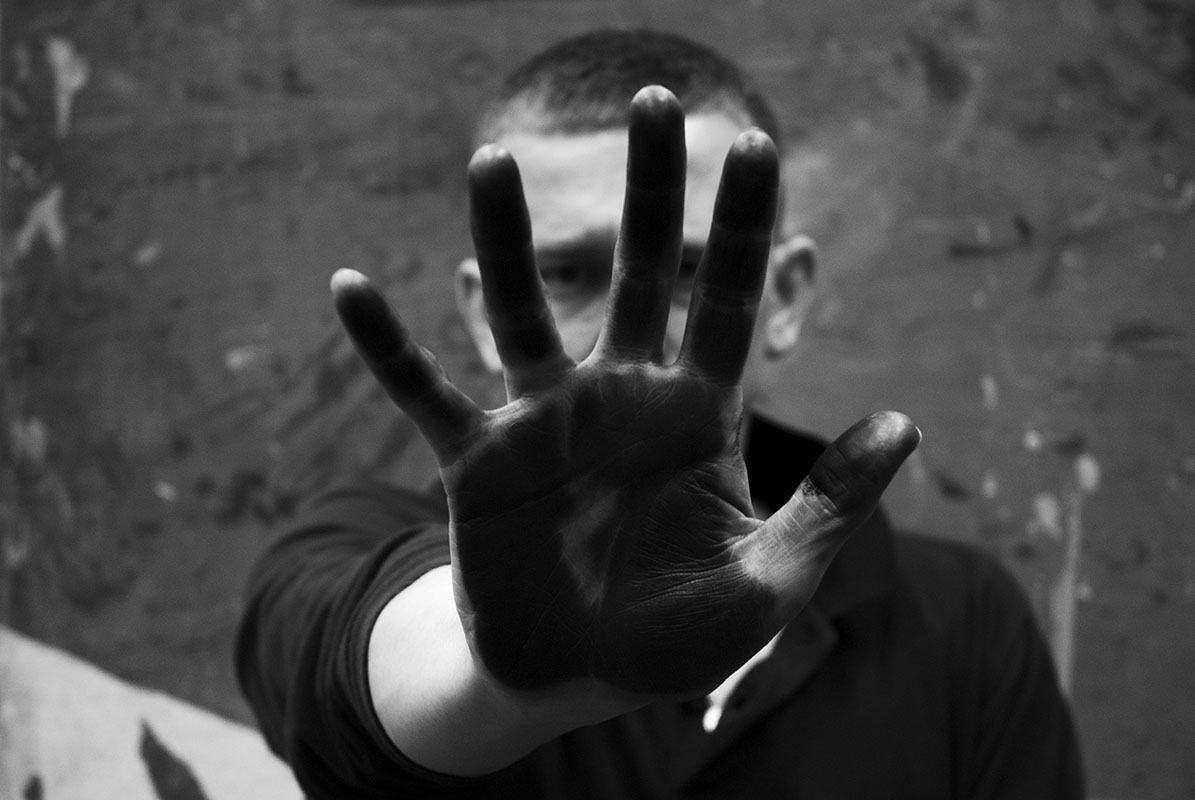