The ways of nature, ruthlessly consistent and irrevocable, seem cruel, and our acceptance of the changes we observe that are forced by the passing of time is far from painless. It is easy enough to comprehend and accept the fact that time impacts on things when we regard the condition of nature as a whole, but not so in the case of things that affect us directly, or the order of the world we have created. The natural rhythm of time is mostly viewed as a monotonous sound of transience in our culture. The awareness of “our time” is related, first of all, to its measurable aspect, rather than to experiencing it in a relative, ephemeral form. We notice the “materiality” of time through perceivable changes, but the ongoing process of their development tends to remain unrecognised.

Stability seems more respected than temporariness. Still, regardless of how Time is understood and evaluated, it deserves to be paid a homage to as an invincible abstract hero. So I have put up a “monument” to time, on the line of the passing time. Discarding the time-honoured tradition of commemorating great events and their doers, I have built a Machine of stone and ice, and in it a transformation of elements occurs before our very eyes. The Machine of Time has been made to celebrate time, and to be devoured by time; the intention behind it is not perseverance as it constitutes nothing more than a transparent and momentary artefact, making us realise the might of time. This disappearing structure contains a paradoxical will to resist its destroying properties. With this short-timed artistic event I would like to initiate an impression that gets imprinted in memory which, by nature, eternally fights with time.

In the early 1990s, I set Ice Clocks in Wrocław’s Market Square, measuring time for residents. I have constructed metaphorical machines out of ice, granite, steel and fire (Melting 1992, 1 m3 water = 1 m3 fire 1994, Heat of Fusion 1995), expressing the never-ending human longing to build a machine monitoring time, its nature and character. These works meant a great lot to me; their industrial conspicuousness and scale bolstered the necessary confidence and, more importantly, made me capable of sharing this energy with others. It is obvious from my later work that this gift was truly vital – to invoke energy in other people to put abstract ideas into action. I always like to stress the fact that the Monuments of Time were possible due to the involvement and passion of many people, with me as a mere driving force.

More than a quarter century ago, I made a heroic attempt at visualising Time and depicting it as an artistic message. Ice is perfect for representing the nature of passing, and from a metaphorical perspective its condition is akin to our human condition. In the Monuments of Time the existence of the ice chunk is vastly compressed in relation to the time people have at their disposal. The creative context helps me arrange an artistic incident, or favourable conditions for conventional observation of time. In the course of action, we are put to a test for acceptance of the inevitability of things we all are part of.

The Machine of Time is an openwork steel structure (cage) for the audience to watch the spectacle of transforming elements. Viewers can observe the transformation in the physical process of a solid turning into water and aerial gas. With the working of time, the narrator playing the key role and the hidden hero, we may perceive the process of change. Naturally, other elements are not meaningless, and we feel them as heat, humidity and gravitation. This is a live spectacle, happening in front of our eyes, planned for a many-hour and even many-day monodrama for one performer – Time.

The Monuments of Time can stop people, encourage them to partake in demanding conceptual art, and especially its ephemeral form. It seems to me that the phenomenon feeds on our fears; Witkiewiczesque pain of existence and mystery of being, the nostalgy of passing, Leopold Staff’s “sadness of bliss” and, lastly, the atavist fear of death. The Monuments of Time metaphorically transferred these fears and hibernated them in an ice chunk of temporary survival. This way of narrating transience allowed me to discover my own artistic language to describe time, and as this piece of world mechanics affects all of us, it becomes universal. The power of this cycle comes from the shared experience of passing time. I use an abstract formula to express my reflection and intuitions to soon enough take the viewer to the very core and essence of my intentions. When viewers discover them, they become a bit stronger in their individual battles with time.

When designing the Machine of Time, I used the hypnotic-magical element of the relation between the artist and the beholder. It is an asymmetrical symbiosis, especially when the society rejects artistic work, unaware of its importance in social life. The task of a hypnotiser-artist is to emancipate the viewer from the pressing urge to designate for the benefit of recognising art for what it really is. This pressing need to refer to reality results from the archetypal fear of the unknown. For a therapy or a hypnosis session to be successful, cooperation is crucial. When the artist succeeds in liberating the viewer from fear, the viewer will accept the undefinable.

Analysing the Monuments of Time, the ecological aspect should also be taken into consideration as it is an integral part of the message. Did anyone in the early 1990s hear of melting glaciers? There was little talk about them, especially in Poland, about the growing problem of global warming and its consequences, and if it was talked about the expanding ozone hole, which the world has since managed to stop growing, was discussed. Undoubtedly, the Monuments of Time, even if based exclusively on intuition, anticipated the danger of melting glaciers that humanity faced at the beginning of the new millennium. Today, it is no longer artistic intuition but a real threat to the world, and a massive challenge to the human race.

Project organized as part of the Symposium Wrocław 70/20 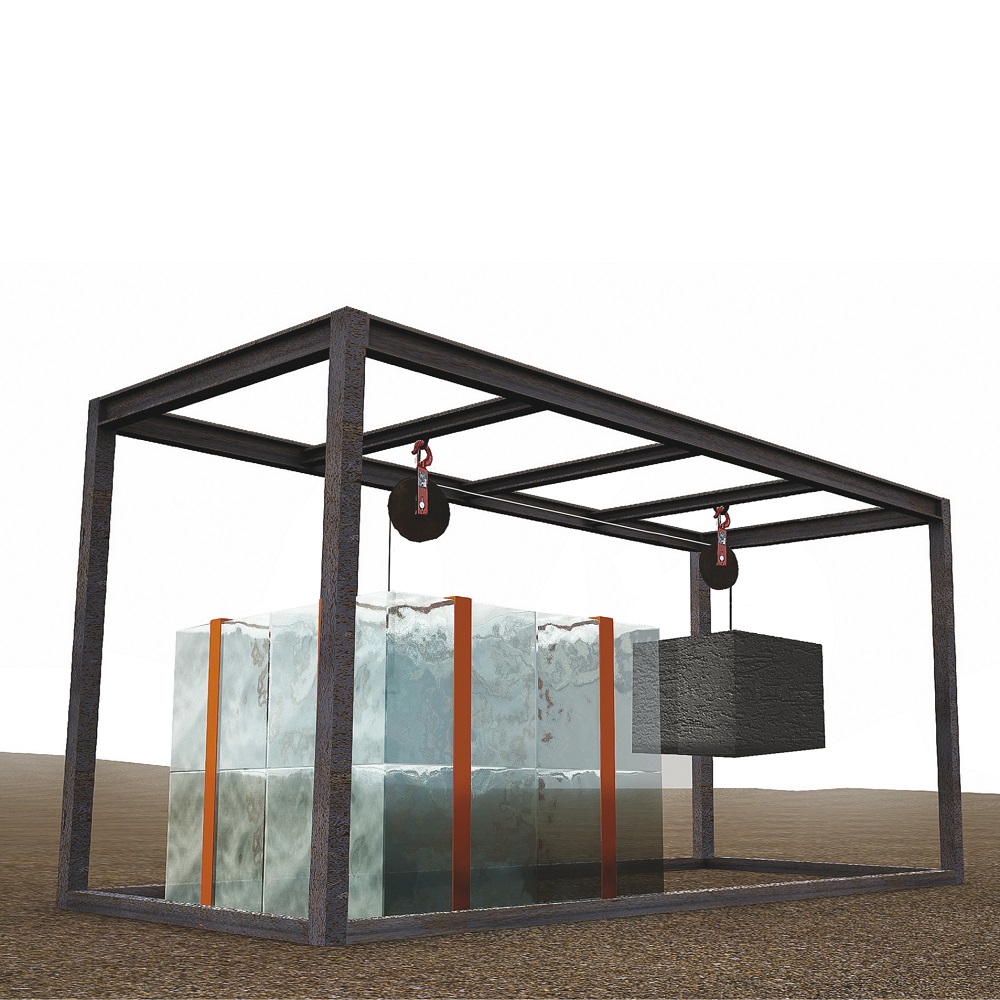 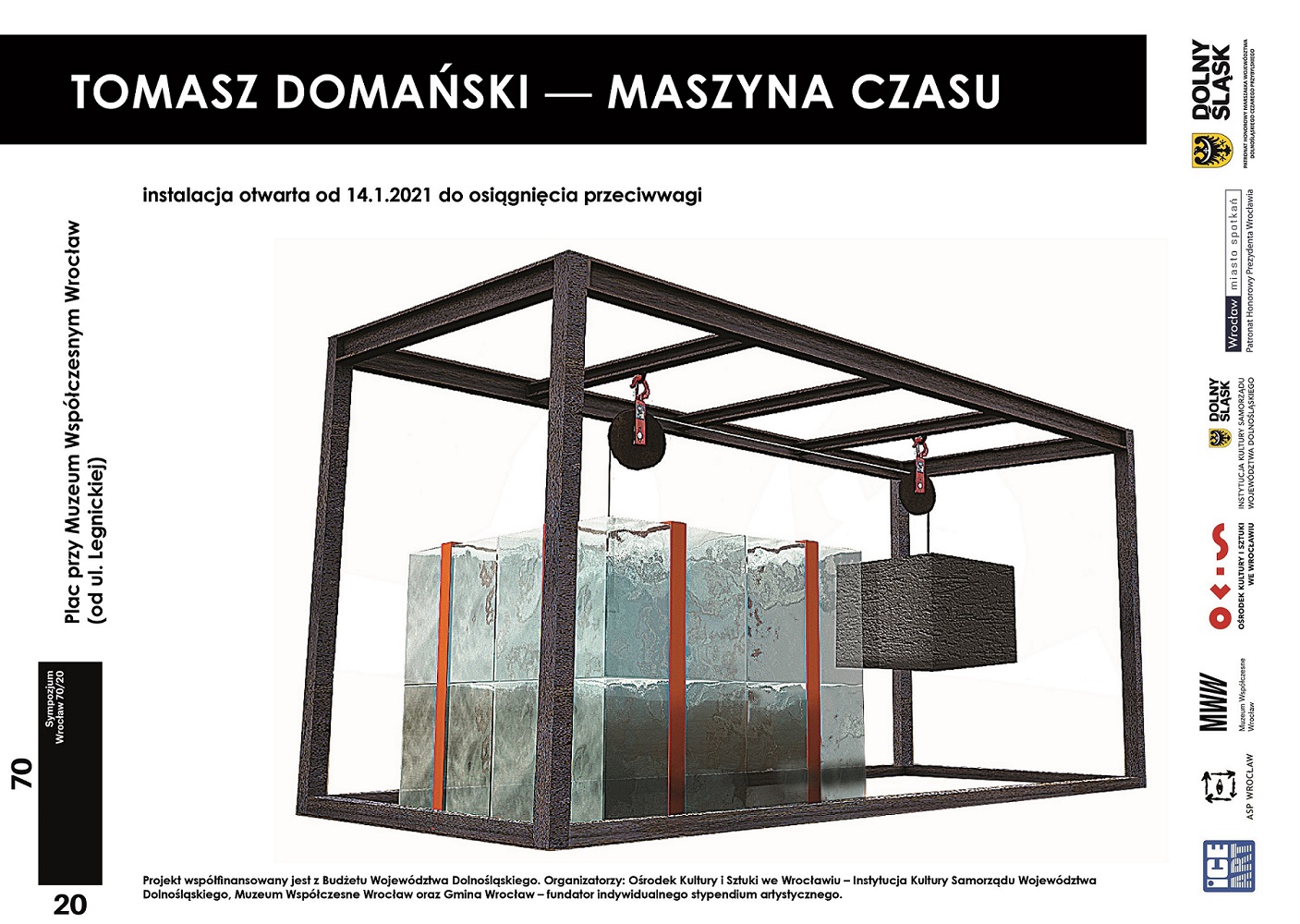