Wacław Ropiecki’s exhibition titled “The Travelling Gallery Archipelago” is mostly based on his photographs from the cycle “The Book of the MORE LIGHT! Travelling Gallery”. This cycle, which has continued for almost four decades, consists of the documentation of people reading the Book itself at different stages of its growth. All these people and places constitute an archipelago linked by their artistic kinship. However, we do not see any artworks since the photographs and captions documenting the subsequent meetings make no claims to being them. Yet this seems to be the easiest way to emphasise the participants’ selfless spiritual aspirations.

Meeting people has always been Ropiecki’s greatest motivation and overriding aim. The exhibition highlights it by demonstrating the effects of his work in the Format student group in Wrocław (1972-1976), during his cooperation with artists of the PERMAFO Gallery (1978-1980), Foto-Medium-Art and the Chip-in Culture from Łódź after 1981. Among other forms of Ropiecki’s activity were his journeys and presentations of the books that documented his meetings with artists, and later his commitment to charitable work in the easternmost parts of Russia (1991-2004), where he chronicled the meetings in his “Change the World bulletin”.

The most recent form of his contact with people is sending the electronic version of his “MORNING COFFEE Collection of Sketches, Projects and Scenarios”. Although the Wrocław exhibition features Ropiecki’s individual works from different periods of his artistic practice, mostly photographs and collages, it particularly emphasises his idea of meetings intended “to get close human contact”, as he expressed it himself in the title of an exhibition of works by Polish artists that he organised in Amsterdam in 1985. 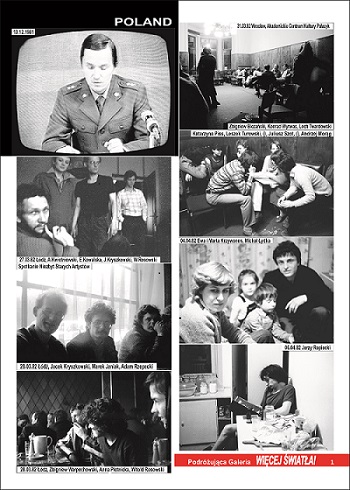 Partner of the exhibition