Yinka Shonibare’s art for years has been consistently revolving around issues related to the colonialism of the British empire, making also references to the contemporary topic of post-colonialism.

This artist of British-Nigerian origin is known for his theatrical, multi-threaded and colourful plays featuring headless dummies, ballerinas, wild animals equipped in blackberry mobile phones and gilded pistols. In his pictures, installations and videos Shonibare uses fabrics which perfectly symbolise ambiguity, and first of all contradiction connected with post-colonial culture. Cloths, which seem to be genuinely African, turn out to be a product initially manufactured in the Netherlands – imitating Indonesian fabrics – and sold in 19th century Western Africa, where they had become part of the African identity only in the course of time.

Shonibare skilfully juxtaposes both historical and contemporary symbols, stories and paradigms – he disguises Victorian figures in folk clothing. In turn, when he addresses the problem of the Arab Spring he presents stuffed animals equipped in contemporary gimmicks. Calling himself a “post-colonial hybrid”, he focuses on dynamics of meanings that arise between popular narrations.

At the exhibition in the Wrocław Contemporary Museum Shonibare presents “Fake Death Pictures”,
a series of photographs where he depicts different variations on the death of Lord Nelson, killed in the Battle of Trafalgar. All photos enact popular death scenes from pictures of such painters as Leonardo Alenzo y Nieto, Édouardo Manet, Henry Wallis, Bartolomé Carducho and François – Guillaume Ménageot, where instead of the main protagonist Shonibare places Lord Nelson. In turn, “Addio del Passato” is a touching video work in which an opera singer – Frances Nisbet, dressed up as Lord Nelson’ wife, performs “La Traviata”, the 19th- century Giuseppe Verdi’s aria.

The last work in the exhibition is “Revolution Kid”, a mannequin with a fox’s head equipped in a replica of a golden pistol which belonged to Muammar al – Kaddafi.

The exhibition prepared in cooperation with the Gdańsk City Gallery.

Born in 1962 in the UK, is a British-Nigerian artist. He grew up in Lagos in Nigeria, then he came back to England as a teenager and graduated Byam Shaw College of Art (London) and Goldsmiths College (London). He was part of the Young British Artists movement. He was nominated to the Turner Prize (2004) and invited by Okwui Enwezor to participate in documenta XI (2002). He exhibited at the Venetian Biennale twice – in 2001 and 2007. He has also exhibited in Brooklyn Museum (NYC), Stephen Friedman Gallery (London), Museum of African Art (Washington DC), James Cohan Gallery (NYC), National Gallery (London), Tate Britain (Londyn), Moderna Museet (Sztokholm), Victoria and Albert Museum (London), Whitechapel Gallery (London), Buena Centre for Arts (San Francisco), Contemporary Art Museum (Kumamoto) and many others. 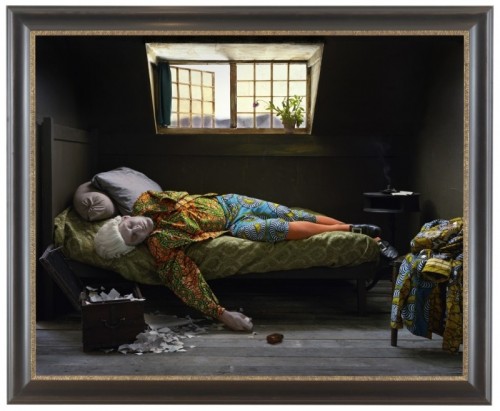 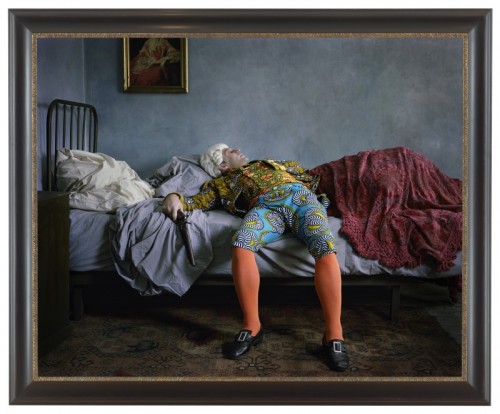 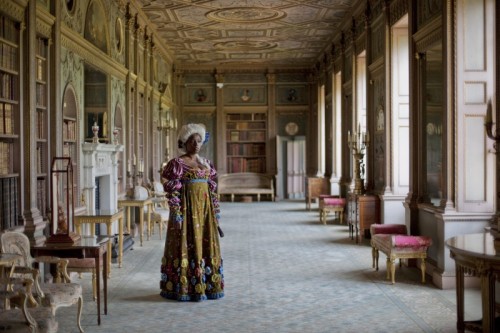 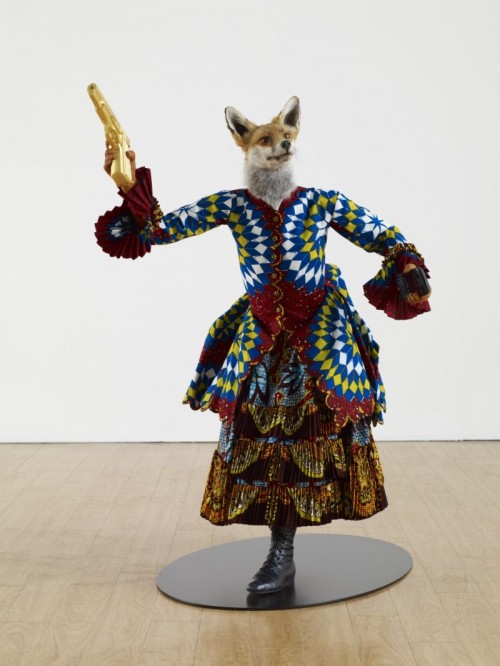 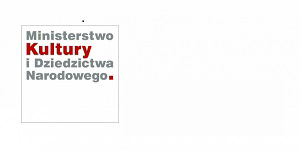 With the support of the Ministry of Culture and National Heritage